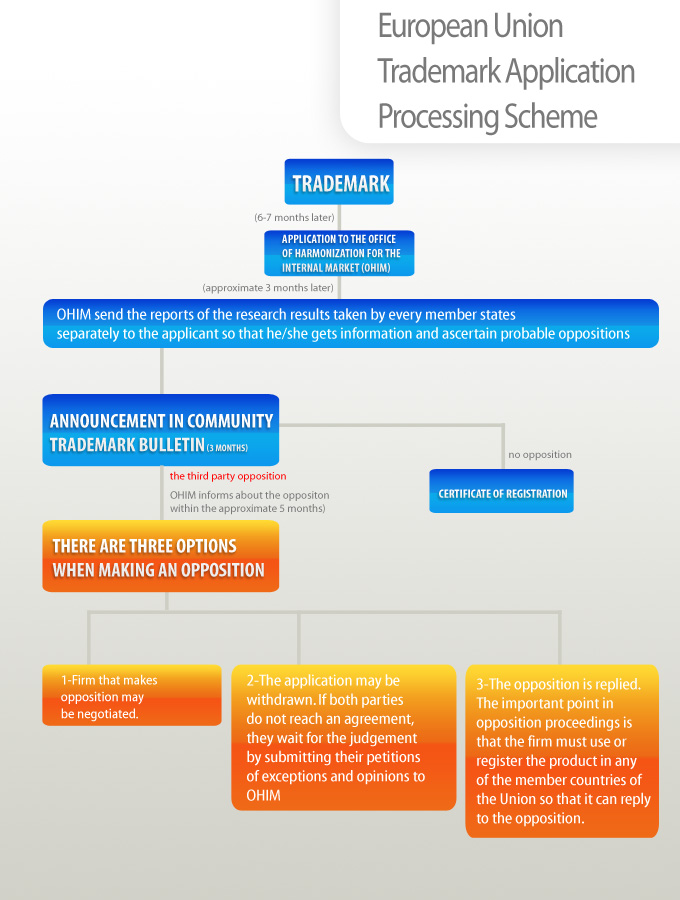 Payments must reach the EUIPO within the time limit specified for filing opposition, which is three months. However, provided that all the steps necessary for effecting payment are taken within this time limit, the Fees Regulation allows for payment to be considered as made on the condition that the following requirements are met: where payment is made by bank transfer, the payment order must have been given within the aforementioned time limit. However, if the payment order has not been made within the last ten days of the time limit specified, a surcharge of 10% will be payable.

The EUIPO has published Guidelines concerning the opposition proceedings which attempts to explain in detail the practical application of the provisions of the CTMR and the Implementing Regulation governing opposition proceedings. In addition, a form for filing notice of opposition is available from the Office, containing relevant explanatory annotations.

The Opposition Division of the EUIPO uses the five languages of the Office (Spanish, German, English, French and Italian). The notice of opposition may only be filed in one of these languages which must also coincide with one of the two languages chosen by the applicant for the Community trade mark, as indicated upon publication of the application in the Community Trade Marks Bulletin. This language will then be used throughout the opposition proceedings.

If the notice of opposition is filed in one of the languages of the Office (Spanish, German, English, French and Italian) which does not, however, coincide with the languages of the Community trade mark application opposed, the opponent is granted a time limit of one month in which to produce a translation into the appropriate language. This time limit, which is not subject to notification on the part of the Office, starts to run from the expiry of the deadline for filing opposition.

The existence of earlier rights constitutes a relative ground for refusal of the registration of a Community trade mark. The Office cannot examine of its own motion such grounds for refusal.

So, the Community Trade Marks Bulletin constitutes the means of publicizing the fact that a Community trade mark application has been filed, thus allowing the proprietors of earlier rights to protect such a right.

Notices of opposition, filed within a time limit of three months following the publication of the Community trade mark application, are processed by the Opposition Division. After checking whether the fee has been paid in time, the Opposition Division will examine whether the notice of opposition fulfils the basic requirements. If it finds a deficiency that can be remedied, the opponent is requested to do so.

Once this phase has drawn to a close, the applicant for the Community trade mark will be advised of the notice of opposition. At this point, a period of two months commences in which both parties can contact one another to try to make a friendly settlement. This is known as the cooling off period.

A natural or legal person may file a notice of opposition based on as many trade marks as are considered necessary, provided that he/she/it is the proprietor.

The only circumstance under which several persons can appear as opponents on the same notice of opposition is when they are co-proprietors of the opposing trade marks.

The language of the proceedings is established when the opponent chooses one of the languages of the Office, which must also coincide with one of the two languages indicated in the application for the Community trade mark. All correspondence with the Office as well as any documents upon which the opponent bases his/her/its right must be drawn up in or translated into the language of the proceedings.

Only where supporting documents furnished in the course of the proceedings (catalogues, brochures, etc.) are concerned, does the Office have the option of requesting a translation or accepting them in their original language. In practice, the Office allows parties to translate the most important elements of the documents furnished which form the basis of the opponent's right and the grounds relied upon.

The "cooling off" period consists of the two months following the notice of opposition and is prior to the commencement of the adversarial phase (in which both the opponent and the applicant participate). Since the adversarial phase has not yet commenced, if both parties reach an agreement that puts an end to opposition, neither party will be ordered to pay costs.

The Office serves notice of opposition once it has established that, in accordance with the CTMR, the opposition is admissible. This does not mean, however, that it is "complete". After the expiry of the "cooling off" period and if the parties have not reached a friendly settlement, the opponent has a period of two months in which to complete his file by providing the evidence upon which his arguments and rights rely. The Office will then send the documents received to the applicant so that he may submit his observations within a period of two months.

Under Article 15 of the CTMR and Directive 89/104/EEC, trade marks are, in all the Member States of the European Union, subject to the obligation of being put to a real and genuine use on the market within a period of five years following their registration. Accordingly, the CTMR grants the applicant the opportunity to request that the opponent furnishes proof of the use of the trade marks upon which opposition has been based, provided that these trade marks have been registered for more than five years.

Those goods or services in respect of which proof of use has not been furnished will be excluded from the opposition. In other words, opposition proceedings may only continue in relation to the trade marks and goods and services for which proof of real and genuine use has been furnished. If proof of use is not furnished in respect of any of the goods and services for which the earlier trade mark(s) is (are) registered, the opposition will be rejected.

The evidence submitted must consist of indications concerning the place, time, extent and nature of use of the opposing trade mark for the goods and services in respect of which it is registered and on which the opposition is based". For example, evidence may consist of supporting documents and items such as packages, labels, price lists, catalogues, invoices, photographs, newspaper advertisements and sworn or affirmed statements.