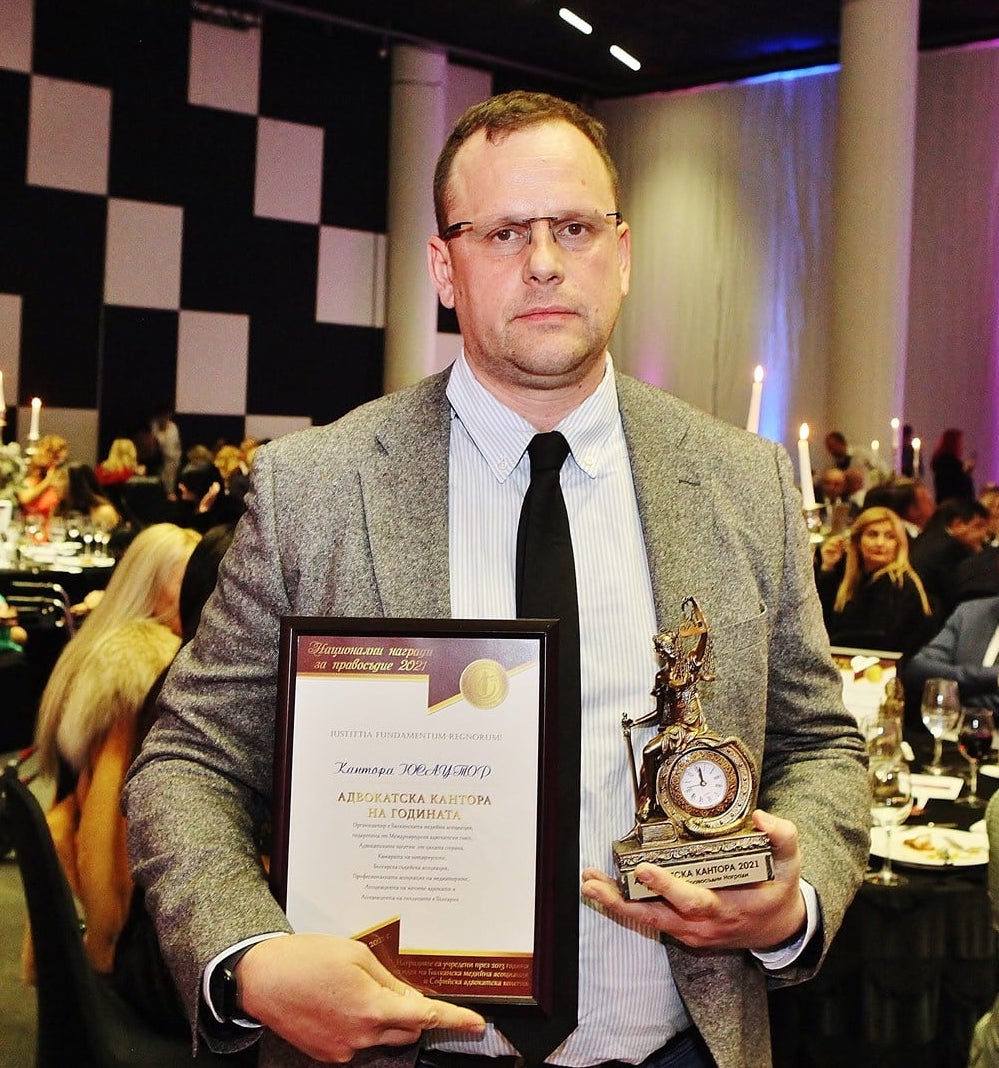 "IUSAUTHOR is the law firm of the year in Bulgaria for 2021.

The awards in the various nominations - Lawyer of the Year, Law Firm of the Year, Judge of the Year, Prosecutor of the Year, etc., are voted by journalists from the justice sector who attend the ceremony, as well as by a professional jury, which this year was composed of professors Ognian Gerdzhikov and Atanas Semov, EU General Court Judge Mariana Kancheva and lawyer Vladimir Donchev.

The award for "Law Firm of the Year 2021" went to the Plovdiv intellectual property law firm "IUSAUTHOR", the prize was awarded to lawyer Atanas Kostov (managing partner) by last year's winner of the "Law Firm of the Year" award - lawyer Petar Iliev. In his speech to the audience, Attorney Atanas Kostov noted that he wished himself and the entire legal community a speedy e-government and e-justice.

The Bar Association of the Year was the Haskovo Bar Association. They were personally congratulated by the Minister of Justice Ivan Demerdzhiev, who also presented them with the statuette and the plaque on stage. The Deal of the Year award went to Penkov, Markov & Partners, for the largest deal made in the country - the sale of the CEZ business in Bulgaria for 400 million euros. Their statuette was presented by the Director of the Investment Agency Stamen Yanev.

With the same number of points from the jury in the category "Lawyer of the Year", the first were lawyer Dr. Maria Petrova and the lawyer from Pazardzhik Harri Haralambiev, who was unable to attend. The prize was presented to them by Advocate of the Year 2020 Vladimir Penkov. The other nominees were Maria Daskalova, Nikolay Tsvetanov and Peter Nikolov - they were announced by the journalist from actualno.com Dimitar Lazarov.

The recognition for the best judge was given to Tanya Radkova from the SAC. Her statuette was presented by Judge Emanuela Balewska - Judge of the Year 2020. In her category were also nominated Ignat Kolchev from the AC Smolyan and Evgeni Uzunov from the District Court Burgas.

The Grand Prix for overall contribution was awarded to Judge Trendafil Danailov, known for his participation in the case against Sergei Antonov concerning the assassination of Pope John Paul II. You can read more on the subject here.